Scarred But Unscathed: Growing in Faith

Jennifer grew up in church, and she was fine with that as her lens for the world. Over the years she has gone through many life experiences that forced her to question the role of faith. Is it something that everyone is born with? Do people simply mimic the traditions of their family and environment which, in this case, revolved around the Baptist church that her father pastored? How does one move from not having faith to having faith or from having faith through others to having faith from within oneself?

Using the author’s life experiences, along with the experiences of 18 others, Scarred But Unscathed gives the reader a unique perspective on faith by providing an introduction to a theoretical framework and taking the reader on a journey of discovery. The stories range from conquering dependency on addictive substances to surviving a life-threatening attack, from living through car accidents to growing through loved ones’ deaths. In some cases it is evident that the experience transcends the reality that we are familiar with and requires the reader to look beyond what is in the physical realm to what may be in the spiritual realm. In reading these stories, the reader may have to dispense with pure logic and put on the lens of a voyager on a trip to an unchartered region. 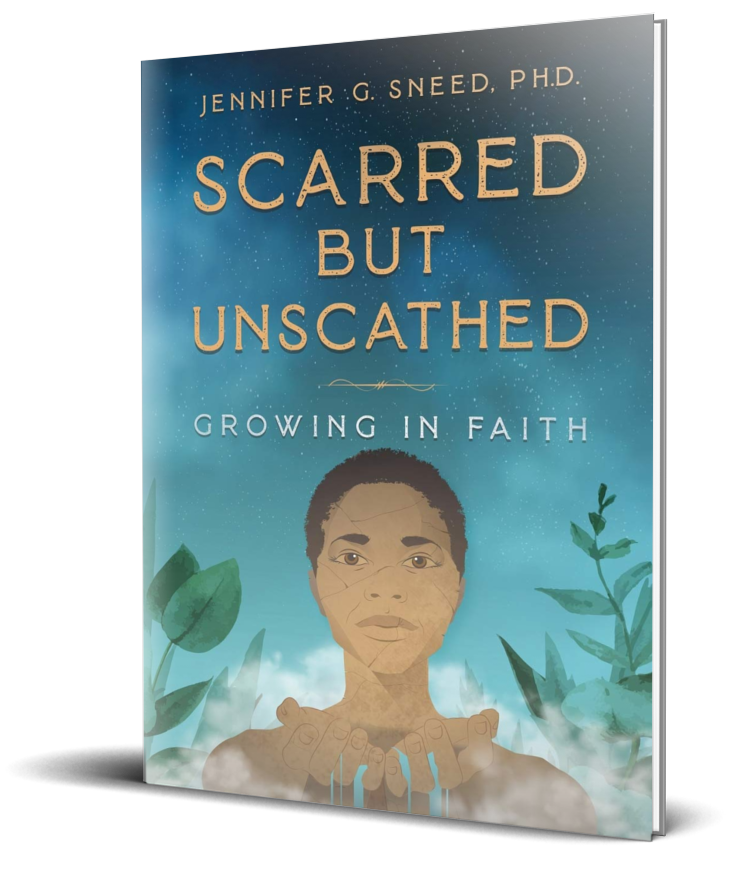 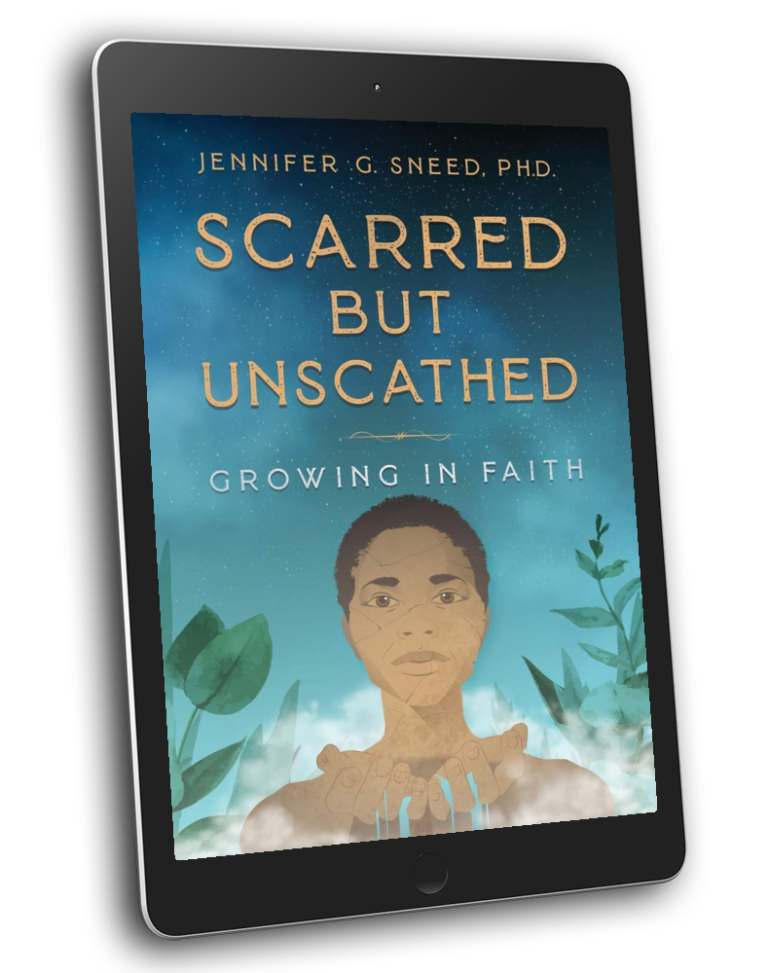 The author does not write the book to argue about the existence of God or to determine the penultimate definition of faith. She does not claim to be a Bible scholar or theologian. She writes to share how faith grew in her, to introduce a framework that speaks to the development of faith and to provoke readers to look at their lives and think about whether their faith – whatever it may be – has served/is serving them. She nudges the reader to consider whether they have been true to what they believe in, and to perhaps consider making changes if s/he thinks it is warranted. The book concludes with “Exercises to Grow Your Faith” that can be used by individuals, small groups or church study groups as a guide for self-reflection.

Dr. Jennifer G. Sneed was born in Chicago, Illinois and began her education at Henry Horner Elementary School before her family relocated to Bloomington, Illinois. She graduated from the public schools of Bloomington-Normal (Illinois), earned her Bachelor’s and Master’s degrees in Special Education from Illinois State University, and went on to earn her doctorate in Educational Administration with a specialization in Education Policy, Politics and Law from the University at Albany/State University of New York.

Dr. Sneed is the daughter of the late Rev. Leo Sneed. Rev. Sneed pastored Mt. Pisgah Baptist Church in Bloomington, IL, followed by the South Calvary Baptist Church in Indianapolis, IN. Rev Sneed, who passed in 2013, played an instrumental part in providing a deep spiritual foundation for his daughter. Dr. Jennifer Sneed grew up in church. She attended Sunday School, worship services and special programs. She sang in the choirs, learned how to create programs, was introduced to, and mastered the use of the technology of the times, and had many opportunities to speak publicly. These experiences not only exposed her to the fundamentals of Christian beliefs but placed her at the ready for the rest of her life.

Dr. Sneed identifies as a preacher’s kid who has lived in the community of faith all her life, even before she could put words together into a sentence. She does not claim to be a Bible scholar or theologian.  She has gone through many life experiences that forced her to question the role of faith but that ultimately led her to become the person she is today who can say she is Scarred but Unscathed.

Many people do not fully grasp that faith is progressive. Our faith grows over time through our life experiences. Kudos to Dr. Sneed for being transparent enough to let people know that her faith was tested and grew through tough circumstances. Stories like the ones she tells in Scarred But Unscathed: Growing in Faith give people hope that they can make it through their tough times to something better.
Rev. Chaun RichardsonAssociate Minister, Macedonia Baptist Church
The book was an easy and thoughtful read. The stories matched the title… Scarred But Unscathed: Growing in Faith. I teared up just thinking about the power of God and how He always brings us through the toughest of situations. The scriptures are artistically woven around the author’s story reminding the reader of how we are all inextricably connected through our experiences. A great book for Bible class or a workshop on faith and God’s love.
Debora Brown-JohnsonSubject of Chapter entitled “Unwavering” Deacon, Macedonia Baptist Church
“Scarred but Unscathed: Growing in Faith is balm for the soul. The personal stories of tests, coping, and faith are palatable and lifegiving. Dr. Sneed’s story and her guests’ stories show us all how to get through painful and difficult times. I strongly recommend the book for any one that believes in faith, hope, and purpose.”
Rev. Kara N. Dunn, M.Ed., M.Div.Founder and Pastor of Joy Springs Ministries
Previous
Next
Menu